We would like to bring to your attention an interview with Sarah Cameron, Assistant Professor of History, University of Maryland-College Park in the United States. The historian scientist has been researching the culture and society of the Central Asia, specially Kazakhstan. As a result of her many years research, she have recently published a book "Hungry Steppe: Famine, Violence and the Making of Soviet Kazakhstan". In this work, Sarah Cameron studies the problem of famine which has greatly affected the nomadic lifestyle of the Kazakh people.

I am aware of that you were living in Kazakhstan and learning Kazakh language to study famine in Kazakhstan.  Why did you choose USSR and Kazakhstan as your research topic at the university?

I became interested in Soviet history because I lived in Russia for two years (from 1999-2001) after receiving my undergraduate degree.  I lived in the Russian Far East, about four hours north of Vladivostok, and I taught English to elementary school students.  I became fascinated by the way that the legacies of the Soviet past continued to impact everyday life.  I then returned to the United States to pursue a PhD in Soviet history at Yale University.

At Yale, I took several courses on the history of the Middle East, in addition to my regular Soviet and Russian history coursework.  Yale did not have a Central Asia specialist, but these courses made me think about a bit more about the history of the eastern regions of the Soviet Union, particularly Central Asia.  At the time, Western scholars had not published much on Soviet Central Asia, and what they had published focused largely on Uzbekistan.  So, I turned my attention to Kazakhstan because it seemed less explored by Western scholars and also because there was good archival access (both the state archives and the former party archives (now known as the “Presidential Archives) were open to researchers).

When have you decided to publish your dissertation as a book? Could you talk about "The Hungry Steppe Famine, Violence, and the Making of Soviet Kazakhstan" published recently? 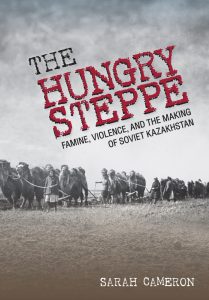 There’s a lot I could say about my book on the Kazakh famine.  I worked on it for ten years!  But I will try to keep my answer short.  I wrote my PhD dissertation on the Kazakh famine and, as is customary for academic historians in the United States, I spent several years revising my dissertation before I published it as a book.  To research the topic of the famine, I learned Kazakh, in addition to Russian.  I also spent about two years working in archives and libraries in Kazakhstan and Russia.

I begin the story of famine in the last years of the Russian empire, when the arrival of large numbers of peasants transformed Kazakhs’ nomadic way of life, making them more susceptible to famine.  I then follow the story through the tumultuous years of the imposition of Soviet rule and Stalin’s attempt to consolidate his hold over the steppe through a violent modernization project, focused on collectivizing the Kazakh nomads.  The book concludes with the republic’s slow road to economic recovery in the post-famine years of the mid-1930s.  Along the way, I integrate numerous oral history and memoir accounts, in addition to state and party documents.

My book finds that through the most violent means the Kazakh famine created Soviet Kazakhstan, a stable territory with clearly delineated boundaries that was an integral part of the Soviet economic system.  I also find that in the aftermath of the famine a new Kazakh national identity emerged that largely supplanted Kazakhs’ previous identification with the system of pastoral nomadism.  Kazakhs began to think of themselves as a national group, as opposed to a social group, or one oriented around the system of pastoral nomadism.

But in many other respects, Moscow failed to achieve its goals.  Ultimately, neither Kazakhstan nor Kazakhs themselves became integrated into the Soviet system in precisely the ways that Moscow had originally hoped.  In fact, the scars from the famine would haunt the republic throughout the remainder of the Soviet era and shape its transformation into independent nation in 1991.

In your published article in the Wall Street edition, it was written like by some measures the Kazakh famine was an even greater atrocity than the Ukrainian one. Could you talk about this a little bit more? What is difference between Ukrainian famine and Kazakh famine?

But the claim that starving Ukrainians were treated in a uniquely brutal manner is simply not true.  Like the Ukrainians, Kazakhs were subject to very violent treatment during the famine, including the closure of borders so that the starving could not flee, the expulsion of famine-stricken refugees from cities, and the “blacklisting” of famine-stricken districts (a particularly brutal tactic that essential entrapped the starving in zones of death where no food could be found). But in Kazakhstan, Moscow also committed acts of extreme cruelty, such as the slaughter of thousands of starving Kazakhs along the Sino-Kazakh border and the expulsion of Kazakhs from their pasturelands at the height of the famine to construct KarLag, that had no clear parallel in Ukraine.  Indeed, it might be argued that it many respects the Kazakh famine was more destructive than the Ukrainian famine, as the Kazakh famine brought about a cultural transformation, the loss of Kazakhs’ nomadic way of life, which was even more far-reaching than that endured by the Ukrainians.

The movement "Zhana Kazakhstan" (New Kazakhstan) published a memorandum "On the recognition of the genocide of the Kazakhs” on May 21st, 2018. They proposed to admit the Holodomor (Famine) in Kazakhstan as a crime against humanity and also recognize it as a genocide.  From your point of view, can it be recognized as a genocide?

The question of genocide is a difficult one.  Genocide has taken root as the ultimate “crime of crimes” in the popular imagination.  Many believe that maximum moral condemnation cannot be achieved unless the label of genocide is applied.  But I challenge such understandings in my book.

The definition of genocide adopted by the United Nations is highly problematic, and it does not fit many important cases, such as the Kazakh one.  In the Kazakh case, we do not see an intent “to destroy, in whole or in part, a national, ethnical, racial or religious group,” which is an essential component of the UN definition.  Available evidence does not indicate that the regime’s intent was to destroy Kazakhs as an ethnic group.  The Kazakh famine, however, would fit broader definitions of genocide that focus on political, social, and cultural destruction.  Through collectivization, Moscow sought to destroy nomadic life, a key feature of Kazakh culture and identity.

But the fact that the Kazakh famine does not appear to fit the legal definition of genocide does not make this atrocity less worthy of our attention nor lessen the scale of Kazakhs’ suffering.  Rather, it should make us rethink why we place so much emphasis on those cases that fit the legal definition of genocide and miss others, such as the Kazakh case, which also stemmed from a political process and were no less destructive to human life.

The US Senate has already admitted that famine in Ukraine is a genocide. Moreover, Ukrainian President Poroshenko called to adopt a declaration regarding the Holodomor in Ukraine on the 73rd session of the UN last year. Why Kazakhstan cannot make a such decision? What can impede to this?

I am a historian by training, not a political scientist, and the primary thrust of my research is historical in nature.  Nonetheless, I can make a few guesses in response to your question.  Kazakhstan has a close relationship with Russia. The Nazarbayev government may fear that further discussion of the famine will imperil its relationship with Russia. For other Kazakhs, the issue of the famine is entangled with an ambivalence about the Soviet past.  Discussion of the famine seems to tarnish the Soviet legacy, which they believe brought enormous benefits to Kazakhstan as well.

During the research, what kind of a new information have you found which before was unpublished? Where did you make your research? Have you visited archives in Russia? Did you have some kind of obstacles during the study, for example, in getting information from the archives?

Archivists at the State archives and at the Presidential Archives in Kazakhstan were very helpful to my research.  In the Presidential Archives in Kazakhstan, I was fortunate to work with a recently-opened collection, fond 719, the People’s Commissariat of the Workers and Peasants’ Inspectorate Commission.  This collection had many important documents pertaining to the famine, and it was an extremely important source for my book.

In addition to the research I conducted in Kazakhstan, I also spent several months researching the topic of the famine in Moscow.  But I found that I had better access to archival materials in Kazakhstan than in Moscow.  Some documents that are closed to researchers in Moscow are available in Kazakhstan.  Unfortunately, I was not able to gain access to the secret police archives in Kazakhstan or Russia.

But the major obstacle I confronted was not the lack of archival materials (I discovered an abundance of archival sources relating to the famine). It was the dearth of materials, such as memoirs or oral history accounts, to tell the “human” side of the story of the famine.  These sources proved to be exceptionally difficult to find.  For various reasons, there are fewer types of these sources available for the Kazakh case than there are for other crimes of the Stalinist regime. But ultimately, the handful of memoirs and oral history accounts that I did find were crucial to my research. Through them, I was able to convey how the famine transformed Kazakh society.

Could you tell me about your future plan? Are you continuing to research Kazakhstan?

Yes, I plan to continue studying Kazakhstan, but my research direction will shift a bit.  I plan to write an article comparing the Kazakh and Ukrainian famines.  Usually, these famines are examined separately, but I think putting them into a single frame of view will help change our view of collectivization.  For my next book-length project, I am planning to study the transformation of the Aral Sea basin over the course of the Soviet era.  Like the Kazakh famine, the Aral Sea crisis is little known in the West.  But I think a study of this topic could shed light on many important issues, including the causes of the Soviet collapse and the growth of nationalism in Central Asia in the late Soviet period.  It could also give us insight into contemporary debates about climate change and water use.

Thank you for an interview